Daemon made me aware of a link last night that Craig had put up on Facebook. Apparently there's been a little bit of chatter on the net regarding "Twilight MMO". Before anyone gets too excited/enraged at the thought, I should tell you that [at the moment], no, it's not actually happening.

From what I can tell, what seems to have happened is Twilight Source put up a news post stating that there would be a Twilight MMORPG, probably after reading about it on Artuji, who may have possibly come across the story first on The Examiner. I think. I kinda stopped halfway through writing that paragraph and lost my train of thought to watch an episode of Psychoville with my sister.

One look at the actual website of this game however, tells you everything you need to know:

- The game is being created for academic purposes.
- Brandon Gardner is the Game Director and Lead Programmer, Steven Danielson is the Concept Artist.
- The game is not going to be an MMO.
- They are going to surrender the game and all it's materials to Summit Entertainment once it is finished, and it's up to Summit Entertainment whether they want to actually publish it or not.

If you want to know more, I suggest heading over to the "actual website" link above and checking it out. 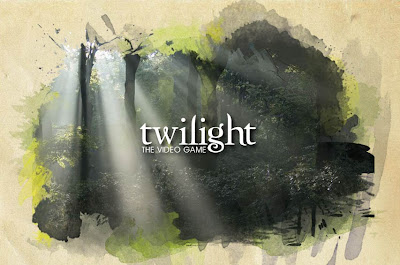 On a more personal note, I seem to still be living in a sheltered world.

I'm a fan of the books and the story, and all the girls I know who have read the books loved it [as well as a few mums and a couple of librarians who had been introduced to them too]. It seems to be a chickflick of the book world. So it's no wonder to me that it's became so popular, that they made movies for it, and that anyone would consider making a game for it.

What did surprise me was the reactions of most of the articles I read about it. Such as this one on Massively. To put it simply: They didn't like it. Some thought the books were rubbish, poorly written and/or lame. Some thought a Twilight MMO would be the end of the world.

At first, I thought that point was a bit dramatic to make, just because one is not into the idea of romance and videogames [and people wondered why there weren't enough women into games...]. But then, I thought about it. Maybe, they're scared of the idea of a Twilight MMO. Women everywhere could take such delight in it, that their other-halves and/or sons would have to fend for themselves. Oh, the horror.

Imagine playing on COD4, or WoW, or whatever your addiction is, and suddenly finding that you're absolutely starving because the lady who normally brings you food has disappeared from reality. The thought of it kinda makes me wanna laugh and say, "Get over it, and stop playing that game for two seconds, or you can eat pixels for dinner." But on the otherhand, the idea of a game as addictive to women as WoW seems to be to, um, people who can't seem to stop playing WoW, is understandably scary.

I think the only way I could condone such a game would be if it helped women develop personally as they played - rather than turned them into one of those people that sit around letting their reality fall into disrepair, while they get sucked into an imaginary fantasy world because their reality sucks, because they've let it fall into disrepair... And if you don't think games can help a person develop as an individual, stick around. It'll happen. If a person can come away from a film feeling like they've learned something or been enlightened, I really don't see why a game can't be capable of the same and still be entertaining.
Posted by Charlotte Gyseman at 17:25