Instead of doing any more work on the white tiger last night, I spent nearly the whole day doing this instead: 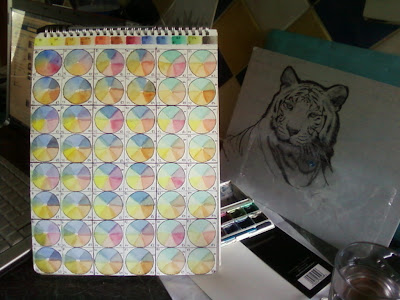 I went through my entire Daler Rowney [Aquafine ?] 12 half-pan pocket set, sorted them into some experimental triads [using the yellow-green as a yellow in some and the bluer-green as a blue, and the oranges as reds] to see what different colours I could make.
The whole process took me so much longer than I thought it would - literally all day - but it was worth it. It forced me to mix colours I wouldn't ordinarily think of mixing, not to mention use colours I don't normally like using. For example, I always thought of R2 [the fifth colour across the top of the first image, or the middle one below] as far too bright to be used for anything that wasn't going to be super bright. Rookie mistake! It actually makes a really nice peachy kind of colour when watered down. And I've had these watercolour paints how long?* 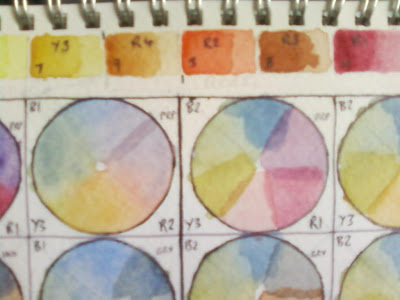 Silly Char; the clue is in the name.
So in doing an exercise like this, you learn so much about what your paints can do for you. Now I know how to get a pretty peach colour, a dark bluey grey, and which blues and reds/oranges/browns to mix to get different purples and greens and browns and greys. I also realised that the bluer green of the two I have [third from the right in the first image] can probably be used as a blue by itself in some pictures quite happily. See the last two columns in the first image - they feel almost fruity to me, sunny, warm, and maybe even Mediterranean. I can't be sure about that last bit though; I've never been to the Mediterranean. 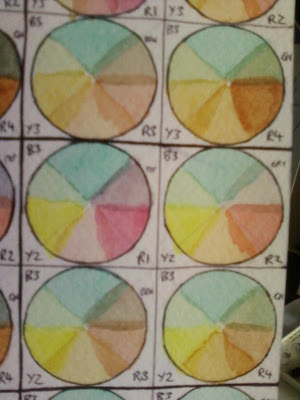 Meanwhile, the left-hand columns using the colder blue feel like they can be used to represent colder climates and northern areas quite easily. 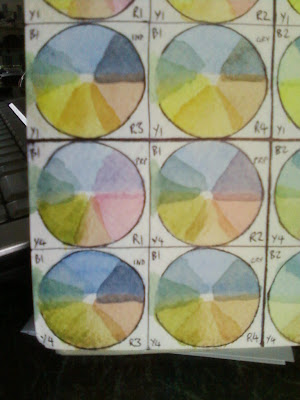 Top and bottom of the left column: I can't not see a forest by a mountain.
One thing I haven't experimented with yet is the black colour in my set. I want to see how it reacts when mixed with each of the other colours in the set, and also what kind of feelings I can get out of it if I replace a colour in a triad with the black. I'd really like to try recreating some of the colour combinations I saw while watching 300 with my flatmates last night. But before I start on that, I really should finish the line work of my tiger!
* Years. Possibly a decade. I don't even know the names of any of my colours; I lost the little tint chart telling me their names a while ago. I'm sure it's lurking around in my stuff somewhere...

Posted by Charlotte Gyseman at 16:12