For the past month of November I've been a half busy / half not busy little bee, typing away at my very first novel.

It's not going as quickly as it should be. I began on 1st November 2011, like all the other NaNoWriMo participants. Unfortunately, I spent many days away from my laptop in that time and wrote not a word. I ended November with just over 17,000 words out of 50,000. Poor. But never mind. I'm carrying on, with a current word count of 19,458 and rising. If I really set myself on the task, I could definitely hit 50,000 before we reach 2012. Easy. Just so long as I keep typing! I've even begun to write in a little 100page 2x3inch book I made, just to make sure I can write something while I'm away from the laptop. 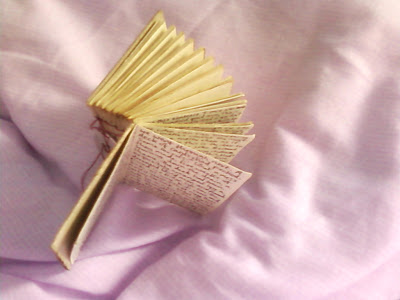 Novelist Gyseman, here I come.
I've also got another idea in the works. I'm going to spend 2012 making sure I write between 137 and 164 words every single day for a year. Maybe every night just describing my day. I could call it "My 2012", since I'm sure a lot of books are probably already called or are going to be called "2012", what with the universe ending and everything. Perhaps you can buy my first novel before Christmas next year for a loved one, just in case the universe does end. Then you can buy my other book after that, if it turns out the universe still exists and is doing fine with us still here? Best to cover your bases.