Let's do the Time Warp again

I found a rather nice clock. 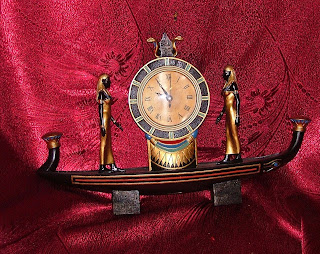 It was in a stock on dA, found here.

Also, I have a lot of updating to do, as a fair few weeks have passed. I had an idea to make it so that when you click the clock, it zooms into the clock, fastforwards through time, and then settles at and zooms out to show the pool at night, where the viewer can click on something to accidently sabotage it [well, accidently at first, no doubt some people will begin purposefully trying to find things to click once they realise that doing so would result in a little animation for them].

Then I had a second idea - what if the view before you is just a decrepid, deserted pool, out of business, and clicking on the clock sends you back in time so you can see what happened to make it that way? Then I suggested this to Dae, who then came up with the surveillance camera idea. The viewer is looking at surveillance footage of the pool. Clicking on things in the "video" would show the viewer somebody's death. Mousing over the cursed statue would cause some interference on the video [see the very quick knock-up video below - BEWARE, the white noise might be a bit loud on there]. There would also be some interference whenever something gets sabotaged and while the statue's eye is glowing.

Here's Seth. Except he won't really be doing anything in the final piece, I just did it as a warm up for drawing and colouring him for real, to get an idea for colours. Also I wondered whether I could scare Dae into thinking this was the peak of my drawing abilities. Hehehe. 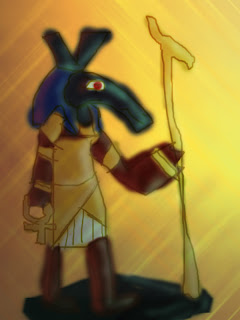 Below is the proper Seth linework, aswell as some colour testing done in chalk pastels. 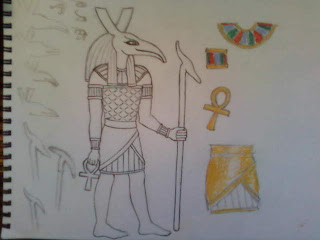 More colour testing... Most pictures I found of Seth shows him with blue hair, but most of the text I found about him mentioned how he is often depicted with red hair. A meeting with Dae decided that we'd give him a black face and red hair, to link him more to death and evil-doing. 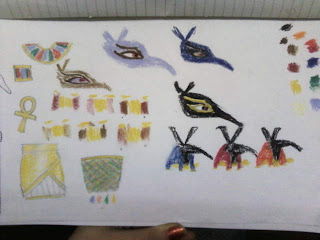 Brought into photoshop and blocked in with colour, not actually finished at this stage [note the arm bands], and I will be making it look a bit more 3D later.
Oh.. I've also just noticed he has no tail, and most of my sources say he's supposed to have a forked one. 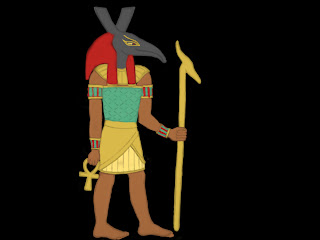 We've also been playing around with perspective a bit [or in my case a whole lot]. 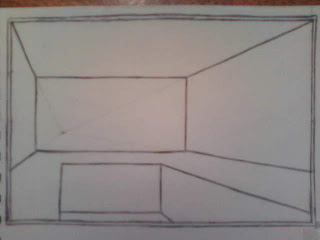 This next picture is one Dae sent me over MSN that he had done so I could have a look. I'm liking the POV, although some of the perspective is pretty out of whack [such as the diving board and the clock]. 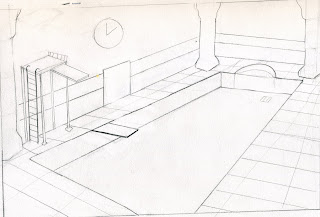 Here I've taken his drawing into photoshop and tried to figure out perspective, basing it on the lines of the pool, because I liked them... 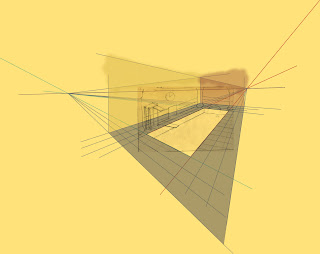 Just yesterday we were given the handbooks telling us the brief and the aim of the project, which was a bit lame as Dave pointed out considering we're two thirds of the way through already, but better later than never.

"..create a set piece of interactive flash animation. The concept and development of the project should follow the premise that the work is a postcard from some remote place. That place might be a surreal world, something ordinary, posted from within a dream; it is up to you to develop in pairs a conceptual design to be created in Macromedia Flash.

Brief:
Grouped into pairs, produce in Macromedia Flash a set-piece, single-screen illustration. This illustration should feature a degree of interaction in the form of 'clickable' or 'scripted' elements, and should focus on the communication of an emotional sense of place and environment."

Hmm... Well, the emotional sense of the place is probably going to be quite a hostile one. Possibly quite unstable as Seth is the Egyptian God of Chaos, and tinged with hints of the anger and frustration of the manager [aka Angry Tech Support Customer].
When I read the brief, I realised that we were trying to do too much, sort of turning it into an interactive mini movie when really what we want to do is create a painting, one that moves when you poke it. I mentioned this to Dae, and suggested we just flash some grisly images of death rather than fully animating them.

On a seperate note... look, a walking robo doggy, and a rope! [Guess what happens next..]

It was finally co-operative enough to upload my animation for me :) I got a B13 for it overall [which is like, a B+] and a B12 for the character design of the first red dog [equivalent of a normal B].

Thats all for now. I really should update this more frequently, it would makes things much simpler when uploading as I wont have a billion images to have to rearrange because Blogger likes to put images at the top of the page instead of after everything.
Posted by Charlotte Gyseman at 23:31