I recently stumbled upon a headline worthy of an Ed Byrne comment.

Going to the article may lead you to the question, "...how is that headline worthy of an Ed Byrne comment?" The answer is, it's not. This was just the earliest story [that I could find] that quite likely led to a stream of other stories a couple of days later, including the one that first came to my attention when I logged into my MSN to check out my emails. 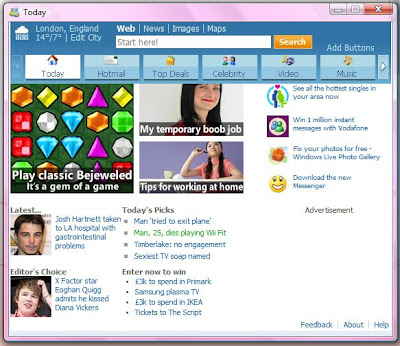 Pretty shocking, even more shocking when I eventually found seven more articles that had been posted yesterday [30 March 2009] about him and two more that were posted today - and those are just the ones I could be bothered to look at before writing this. I have no doubt that more will spring up today and tomorrow. I think it's lame how many people will read these headlines, simply because somebody read the first article and thought it ironic that somebody happened to die while doing something that is supposed to help us live longer and healthier lives. The Ed Byrne joke I have been referring to of course has been the one where comments on Alanis Morissette's song, "Ironic".

The family were told he could have been killed by Sudden Adult Death Syndrome.
Also known as Sudden Arrhythmia Death Syndrome, it is a disorder of the electrical system of the heart

- Mail Online
To that annoying person causing another waterfall of diss to the games industry [and by association, me and all my course mates], inadvertently or otherwise: Tim Eves' death was not ironic [that is, if he did die from SADS and this site is anything to go by].

If he had been in need of some exercise to the point where his life expectancy was affected, and then he purchased a Wii Fit in an attempt to extend his life expectancy, but then died while using the Wii Fit because the lack of exercise up until the decision to purchase a Wii Fit had caused him keel over... That would have been ironic.

Hell, it would have been ironic even if he had died carrying it home due to not being accustomed to any kind of exertion at all.

As it is, he was thought to be perfectly fit and healthy before he died. He helped to lead the First Belton Scout Group. He played in a band called Turnstone, which became Distant Sun [I presume as the drummer, as he was buried with his drumsticks in his hands], he enjoyed cycling, and fishing. My condolences go out to the people who knew him.

His death was simply unfortunate, and I should like to give you - the annoying story twisting sensationalist [and all those who saw your story and repeated it with similar headlines] - a good kick up the bum, not only for continuing the games-are-evil train of thought in such a pathetic manner, but also for causing thousands to register Tim Eves in their minds as "that 25 year old dude who died playing that Wii Fit thing...".
Posted by Charlotte Gyseman at 13:50

Email ThisBlogThis!Share to TwitterShare to FacebookShare to Pinterest
Labels: Rants