I've been checking out the blogs of fellow CGDers, and it looks like they've been good and busy - unlike me. Seems like I've been spending more time tackling an imagined problem of feeling trapped, and in the process been thinking, "Work for The Industry? Urr, no thanks, I want to work for myself!!"

While the thought itself is sound, the feelings holding up that thought aren't so good. It's like I've built up The Industry in my head to be this monster that wants to grab me, trap me and squeeze the life out of me. But a lot of deep thinking recently has made me notice that this way of thinking - Me vs The Industry [or generally speaking, The Other] - is bad. It disturbs my peace, presents a sense of conflict, and quite naturally just makes me want to run the fuck away. It's also a feeling that's been seeping into other areas of my life, which to put it lightly has been... annoying. A friend, Dave, seems pretty aware of this and has been trying to help me, which kind of amuses me. I think he's trying to get me to be more open and expressive. I don't think I need him to be doing it, I think if anything it's just making me more stubborn to hide. Probably because I like seeing him push people to do want he believes they want to.

Okay, enough blathering about that. Enough stubbornly doing nothing but watch and think. Time to actually DO something.

Okay, so I've been reading up a little more on like, Cryptology and Steganography and stuff like that, coded message and hidden messages etc. And before I left campus to get back to the Shire, the flatmates had a time where they suddenly discovered Audiosurf for themselves. I started thinking about maybe writing my dissertation on Flow or being in the zone in games, but I also started thinking about maybe making a game myself that involved going along a track.

So, I've got got this idea of making a game that will inadvertantly teach the player a bit of morse code [something simple, gives me a bit of limitation to work with]. It'll have sound, it'll have to be fun, and the point of the game will be similar to games like DDR and Guitar Hero and stuff where you have to hit the timing right. Haven't figured out what engine or software to make it in yet. Thinking I might check out Gamemaker again to work out the mechanics or whatever. 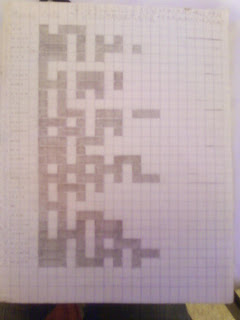 Getting more familiar with Morse code.
Also, since Autodesk have started doing that free licences for students thing, I should probably make use of that this summer too. I've decided I've got enough cash to not bother with a usual summer job of cleaning or serving the public/guests to Pembrokeshire. This summertime is for me.

And don't worry, I'll be posting better posts with less moaning and more pretty pictures soon enough. My list of things to do this summer include buying a decent camera, and actually making some jewellery instead of hoarding my string and beads like they're the last load of string and beads on the planet. Not that anyone reading this blog should care about string or beads or jewellery...
Posted by Charlotte Gyseman at 14:02

Email ThisBlogThis!Share to TwitterShare to FacebookShare to Pinterest
Labels: Gaming, to do