Roath will be happy days for me, I think!

Okay, I suppose I deserve a slap on the wrist. Not only have I not been doing anything on the book designs front in the past few weeks, I have also not been doing much in the way of Uni work either, and my 365 page a day project has been neglected for... I'd say around a month. I am a bad, bad girl.

But wait! I have not been doing nothing!

I've been heading out to Cardiff a lot lately, first to find and view and choose a house to live with some friends. There are eight of us, six of which will still be in Uni next year, but we have split up into two groups of four for the purposes of house-finding. I'm going to be living with Claire, Dave and Todd, who I can affectionately refer to as The French Actress, The Dark Dove and The Wizard Rockstar... Really need to come up with some good names for the other four guys. I'm also not sure what nickname I would have, although I've been told by the DarkDove that if I were a Pokemon I might be a Persian, and that the French word for cat is pronounced the same way as the first half of my name. Perhaps I'm The Petit Chat? 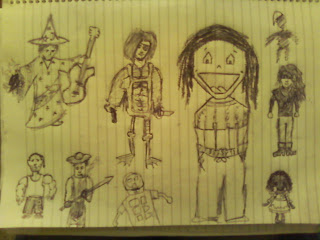 Almost us: This image drawn by The Wizard Rockstar includes members who won't be part of the Cardiff crew, and is missing out a couple of people...
We've all managed to find houses and flats in Roath, literally a couple of blocks away from each other, which is fantastic. We won't have a garden in the flat my half will live in, so I was looking up allotments in Cardiff and found some cool things going on.

Then I found out all about the Roath Market, and the Craft Market too, as well as an apparently abundant craft culture in Roath [see here too]. Needless to say, I am now even more excited about the first post-Uni year of my life than I was before!! And unfortunately more distracted from my current Uni coursework....

Come now Petit Chat, don't get too ahead of yourself!
Posted by Charlotte Gyseman at 00:35

Email ThisBlogThis!Share to TwitterShare to FacebookShare to Pinterest
Labels: Life