Learning Blender (Day 7) - Adding details and creating the other side of the street.

Here's how the place was looking at the end of Day 7: 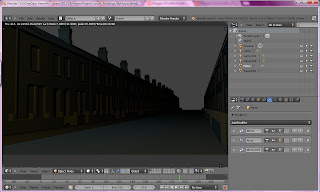 I've added blocks to the front walls, arches to the front doors, windowsill ledges and gave the chimneys a little more character by adding those round things you find on the top... I've also added another  mirror modifier as you can see, to duplicate the other side of the street.

That was only really to see what it looks like with two sides of a street done. In reality, the other side of the street is slightly different to my side of the street. As practice for speeding up my modelling, I've tried modelling the opposite side of the street completely from scratch to see how far I could get in forty minutes. It wasn't quite far enough for my satisfaction, so I kept going. Here's how it looked after about two hours, with occasional distractions. 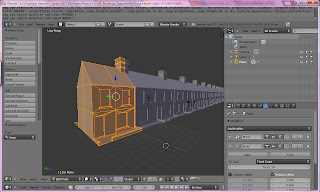 As you can see, the main difference is in the layout of the front window on the bottom floor.

I managed to make the basic shape, added the windows and door shapes, added the arches above the applicable window and door (according to a look out my window, the top windows in the houses opposite don't actually have arches. I'm not sure why...), added the windowsills, gave the chimney some character, added drainpipes and guttering, and added the front walls with some character and a plane for the dividing fence between the properties. I think this would probably be enough for a low poly game, at least for buildings that players never go into or see behind.

For more realism I suppose I would add the round things on the tops of the chimneys, and the TV aerials, but perhaps those are best done separately later anyway as they aren't all the same with some having extras and others missing some. The arches also have keystones that stick out slightly, which you don't find on the buildings on my side of the street.

Other than that I think the only thing I would do is tidy up some of the vertices to give it fewer polygons, for example, that line going straight down the side of the house would be removed, as would the faces for the houses not on the ends of the row and the floor faces I used as guidelines underneath it.

I'm thinking that today (Day 8) I'll read through Chapters 9 (Materials and Textures in Blender) and 10 (UV Unwrapping and Painting), have a bit of a play as I do, and then later tonight try another forty minute modelling-from-scratch challenge and see how it goes.

Posted by Charlotte Gyseman at 12:29