This post is all about a series of birds I have been drawing.

It all began when I went to visit my boyfriend in his new flat, fifty minutes walk away. I found a copy of Scott McCloud's "Understanding Comics" on the work desk. Then I read it.

I proceeded to become obsessed with the idea of creating comics to illustrate things. In fact, I'm surprised I'm not trying to illustrate this post. I think it's because this story is not very funny.

After reading through the following links, I started to play a fancy game of scribble game.

You know the one. Someone draws a scribble, and the other one has to make a picture out of it.

After reading the posts about squaring the page (I'm currently at "Layout Workbook 8"), I started squaring the page; drawing squares and diagonals and circles, and then drawing a picture out of those initial lines.

The result has somehow ended up being a series of bird-like things.

The first one was spontaneous. I saw something that looked a bit like a beak, and so a beak it became. 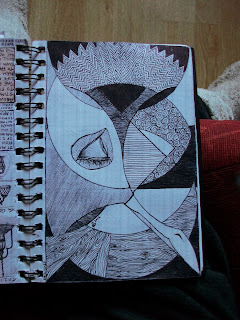 The second one was just because I wanted to draw another bird. 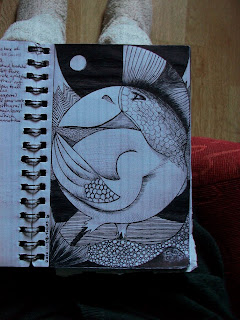 The third one was because it was staring at me from the future. Once I saw it, I had to draw the frowning owl. 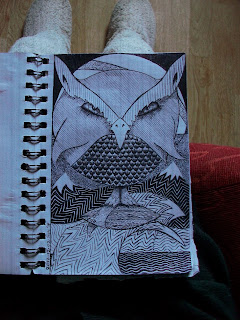 The fourth one was a request that went wrong and so was adapted into a different kind of bird than requested. 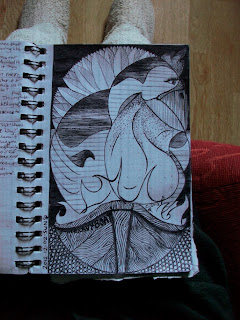 The fifth rectified the mistake made in the fourth. 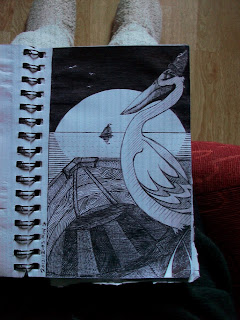 The sixth is currently still in my head. It was suggested by someone after they were shown the turkey in the fourth. It's going to be a peacock.

Follow this blog if you ever want to see the peacock alive. in reality, or improve your chances of seeing the tweet announcing the existence of the bird on my brain by following @CharGyse on Twitter. By the way, the answer is the egg.
Posted by Charlotte Gyseman at 00:11