I am the white rabbit.

I'm not going to tell you how I couldn't work out for ages why my laptop's bluetooth wasn't working, only to find that I must have flipped the switch on the side turning the wireless off, and didn't realise for weeks because my internet connection in my room at uni doesn't require wireless because it has a wire.... because then you'd know how observant I can be.
So now, what can I show you...

Well, there is part of the dogbot's walk. It was done flipbook animation style for a walk cycle excercise. But.. you'll have to wait for that because apparently the only place I saved that video was on the media drive at uni.

There's also a little group project I was involved in where we had to come up with and propose an idea for a game to get traffic to the uni's website [other groups had other briefs]. We came up with a little game called Gastronomy, where the student collects cans of beans floating in the air to.. ahem.. propel himself to the stars.

Apparently we did really well in the presentation, having kept it simple. Also we were told that somehow we managed to make the idea sound... half decent [considering it's basically a guy who farts his way to space].

We've also started life drawing classes, which I'll admit I was worried about, not because of my skills but because I thought I might laugh the first time. I was lucky as the only naked people I've had to draw have been female, so I've not really had to draw anything scary. It was a little harder during the second class as we didn't have a proper model to pose for us, instead we had to pose and draw eachother [not in the nude, I should add]. 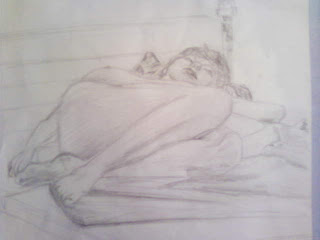 The life drawing teacher, Elfyn Lewis, is pretty cool and each session he sets us a homework. First was a self portrait in pencil, second was one using biro only, third to do over the holidays is another biro of ourselves, and one of a friend or family member in pencil [I've yet to start the third, but I'd better get on it soon now as we need to spend a good few hours on each]. 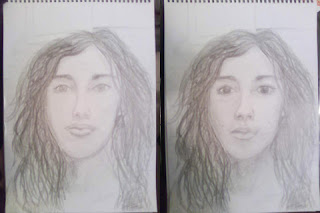 Before and after on my first portrait. The mirror check made it blatently obvious that I'd drawn the eye on the left and the mouth too high in the first shot, allowing me to adjust it before doing more shading.

Before and during the second portrait. I found drawing initially with dots rather than faint lines better as the marks made in the wrong place were less noticeable. 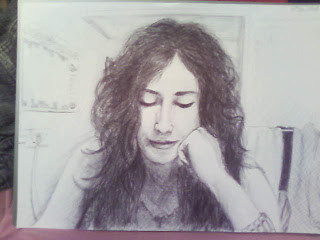 Final second portrait, I was sat at my desk in my room

The last lecture I had was a cool little Game Maker tutorial which was pretty fun. Barry Atkins [who's unfortunately not gonna be lecturing us for the next year cos of another job - laaame! His lectures aren't boring enough for me to feel indifferent haha] taught us how to make a little spaceship that moves side to side, with aliens to shoot at that move randomly [it's funny, when I've watched family members play what I made, and sometimes when I play myself, it feels like they're moving intelligently although I know they're not]. Since coming home I've edited it slightly so that the first screen displays the controls, with "Do not push" buttons moving around randomly. It shouldn't take long for players to figure out what to click on to start the game... 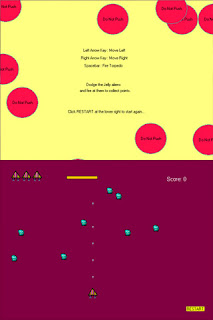 That'll do for now methinks. At the moment I'm just waiting for a friend to send me a guest-pass to start playing World of Warcraft, he told me to check my emails but it's not there yet... I've played it a little, and I like the fact that to respawn you have to run your spirit back to your body. It's a nice touch, even if it does get a tad annoying when you've had to do it 5 times in a row. Moral of the story? Don't let the character die in the first place! As for the rest, I've noticed I'm not like the other gamers and it's unlikely I'll be spending time levelling on purpose, but will just be exploring what these Blizzard people have created.

There were some videos I wanted to upload here, but for some reason it's taking waaaay too long. I'm giving up on them for now. So... yeah. 'Til next time!

Posted by Charlotte Gyseman at 21:17 No comments: