Been back in uni for a while now and our first task has been to get together with a partner and come up with a game idea based on a natural process.. and then pitch it to the rest of the group a week later. That intial pitch has come and gone. I noticed a few of the ideas being influenced by the same process, and also some of the ideas seemed to have similar game mechanics but different subjects [one involved moving planets to influence the path of a meteor or comet, another involved using seismic activity or wind or waves to direct a ball or similar object though a course, both ideas using the mechanic of changing the environment in order to influence the path of something].

I teamed up with Ollie on this one, and we've come up with a game that involves attempting to influence the behaviour of creatures [insects mainly] in order to save the Large Blue Butterfly from extinction. It's pretty much based on the real life extinction of the Large Blue, which disappeared from the UK in 1979. In 1980, conservationists imported Large Blues from Sweden, so now there are like 30 colonies of the pretty little Large Blues fluttering about across the south west of England. 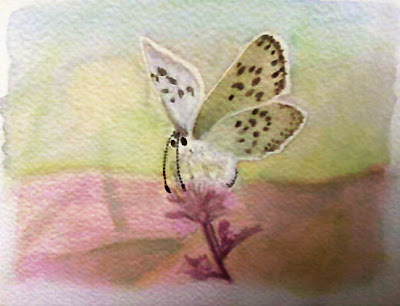 Watercolour image I did of a Large Blue Butterfly. I did actually adjust it on photoshop, the sky is darker on the original painting and the dusky pink in the background was added later aswell, to match the Thyme's colours and make the ground in the background darker.
For those of you interested in stuff like this, the Large Blue is interesting in the way it depends on a specific species of red ant to survive, who in turn are quite dependant on a specific kind of environment. If there aren't enough rabbits keeping the grass short enough, the ants won't be able to hack it because they need it to be a certain temperature, and even a centimeter difference of grass length causes a big difference in temperature to the ants. If the ants are not around, then there's no way the Large Blue can survive through caterpillar-hood, because the later stages of it's life involve living and hibernating in the tunnels of Myrmica sabuleti, eating ant grubs while disguising itself as one to prevent itself being attacked and eaten by the ants. I'm getting a slight sense of deja vu writing this, so I've either written this on here before, or I've just spent a lot of time explaining how the Large Blue lives...

Which brings me nicely onto my next point to which the title of this post refers: pitching. Again and again. It seems to me that the main aim of this exercise is not to create an amazing game USP [although that is an important part of it], but to learn how to present our ideas to another person; to be able to explain to another in a way that inspires and excites them, and makes them want to support your idea and become involved. I'm not surprised to be fair, pitching ideas to people who have the money to pay you to do the work seems quite a fundamental part of the system in the games industry at the moment.

Moving back to the topic of ants [yes, I know, I'm going this way that way forwards and backwards over the Irish sea...]: they're brilliant aren't they? I've got to do an image of a flood in an ants nest from an ants perspective, and while I was trying to find some good underground images to look at I found a couple of really intriguing videos. The first was of an ant colony building a raft out of themselves. The second was the video below.

I find it ironic how, in trying to make it sound epic, the narrator actually makes the video seem a bit hilarious to me - despite how really quite amazing the subject matter is. It might just be me though - I get amused listening to the different voices narrators have on adverts, such as the chummy way supermarket ads often talk to us, how car adverts are always cool, but car insurance adverts are never ever as cool, and how films are always advertised in pretty samey ways with the narrator who always talks in that special voice that tells you whether the movie is scary, a comedy, an action film.. or even a comedy taking the piss out of the scary film genre. If you watch TV in Britain and aren't hard of hearing, I know that you know exactly what voices I'm talking about.

Posted by Charlotte Gyseman at 16:01