I was quite stuck on what to write my 2000 word essay on, seeing as I was going to write about how Fable 2 expresses an emotional realism and yet couldn't really remember how it went, nor could I really replay it as I don't own any form of Xbox nor the game...
Enter the Steam Holiday Sale. 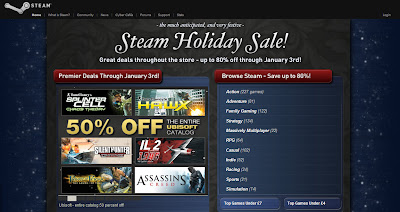 I bought myself Mirror's Edge for some lovely cheap price. Never played it before but I'm liking it, despite causing Faith to die a lot because I'm not very good [yet... well, I'm playing on easy, and she's dying lots even when there's no one shooting at her... hah..]. Although I did somehow seem to get quite good when I had to chase Jacknife around the rooftops before he grabbed a loose pole [*snigger*], but that was probably because I thought that if he could do it, then it could be done.
So, I'm still answering the same question [“While photorealistic animation and gaming visuals offer a graphic realism, in what ways have contemporary titles such as Half Life 2 (Valve, 2004) succeeded or failed in expressing an emotional realism?”], but I'm now doing my essay on Mirror's Edge.
I noticed earlier today that the question says "expressing", not "creating", which might be a little trickier for me because I keep noticing the ways it creates emotion in the player [which one has to argue is probably real if the player is really experiencing things like adrenaline rushes and satisfaction from getting it right and stuff.. ? Yeah... We established in the seminar sesh's that the term "emotional realism" has to be carefully defined...]. But I don't think "expressing" and "creating" are quite the same enough for me to go too deeply into it. We'll see, maybe I can carefully word it into a loophole, cos I'm finding it quite interesting.
And yeah... If you're anything like me [constantly being told to play more games], then go check out the Steam Holiday Sale and see if anything takes your fancy :)
Posted by Charlotte Gyseman at 02:21