Check out this post for the previous Character Mini-Bios.
Here are the [almost] final characters all nicely drawn out.. :)
Squeak: An ex-Pirate princess, she ran away from home to join the Games Industry as an artist, because she thought there was more to life than just pillaging treasures. She's really good at arts and crafts, and by that I mean, sticking people to things [such as the floor] using glue, and, dare I say it, chucking glitter at people. Meh, why not, it's pretty. I changed her hair to make her look more feminine, an then invented the new back story now that her hair looks a little like a tiara from the front, but a mohawk from the side; rebellious royalty that she be. 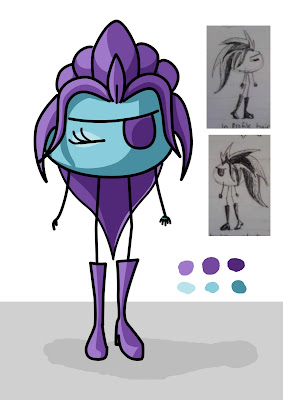 I did this today in Maya to see if it works in 3D. It was thoroughly enjoyable. 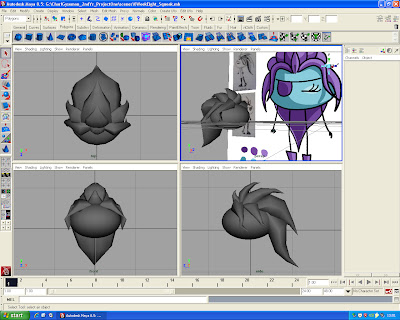 Keydude: Mr Angry&Jagged on one hand, but Blunt&Straight-to-the-Point on the other. He's rather good at being brutally acrobatic. After a little bit of discussion, we've decided to round his head off a bit, cos he looks a little bit too straight in amongst the other characters. Not sure yet if I'll make it properly round, or just slightly. I'll probably go with slightly. Also may remove those stumpy little legs of his seeing as he doesn't really use them [check out this guy for one-limbed awesomeness]. 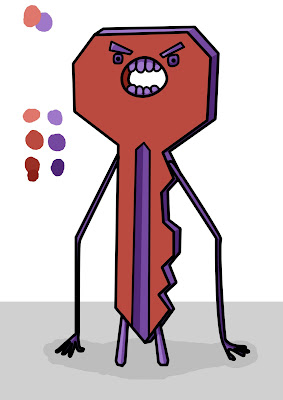 Some quick drawings of Keydude doing a cartwheel and a breakdance move that may or may not be called a swipe: 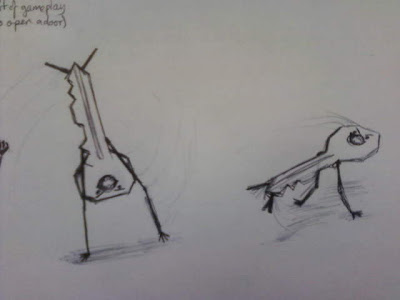 Jack: The Sound Guy, who is like some kinda emo, cowboy, Earth child, cat thing, with headphones for legs and a headphone jack for a tail. He's depressed because he's really into nature and feels like industries are ruining it, but that there's nothing he can do about it but go with the flow. Conversely, he likes to tinker with sound technology. Maybe cos he's kind of made of it and it seems perfectly natural to him. He walks like a cowboy strutting, can use his tail like a lasso, and jumps on peoples heads to play them music out of his headphone-feet. Don't think I need to really change anything on this guy at the moment. Do need to try modelling him up in maya to check how he looks in 3D though. 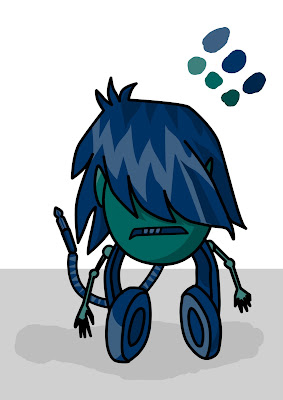 And here are the ones Ben designed:

GamesTesters: I don't really know the full story behind these guys yet, but I do know that they are intended to be NPCs in the game, and that they are generally always together. I think we've changed it so that there are now only two of them. 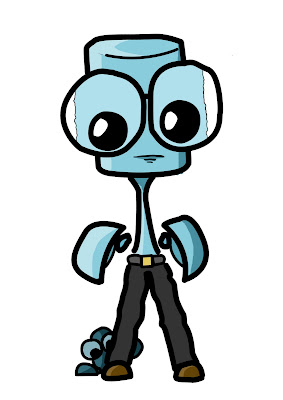 BigOomphGuy: The guy keeping everyone else in order. He can't stand being told what to do due to his strange mean-little man complex, which is why he's satisfied with a role that allows him to tell everyone else what to do. And let's face it, who would dare push him THAT far? Just need to define the face a bit better on this guy, through some colouring on the nipples. Cough, I meant, colouring on the eyes. And possibly move the eyes up a tiny bit. 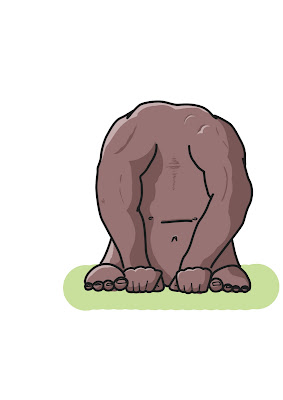 Po: He's a little runt. Nobody knows what the point is of having him around, but they don't really care to ask. Nobody takes him seriously. They let him sit at his desk, furiously scribbling away. But when he gets really worked up, his imagination becomes a force to be reckoned with; literally. Shadows from his mind spring up behind him, and he controls them like puppets. Apparently this was the weakest looking character in design terms, so we're giving him some hair possibly and a tie to break up the "weird neck thing" he's got going on, and to give him some more detail. Also, he thinks he looks more pro because he wears a tie to work, and he thinks it's awesome that he makes games for a living. If he had any friends outside of work, chances are he would brag to them about it. 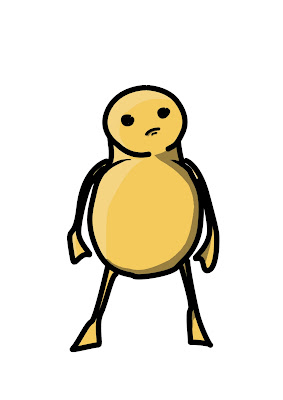 Posted by Charlotte Gyseman at 00:46