Urghh. My brain is hurting. 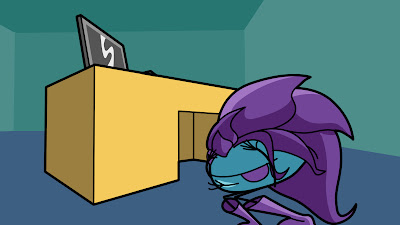 Handed in my essay and the FMV today. There was a sound issue where I'd imported some narration, but for some reason it was playing twice as fast and was high pitched, while none of the other sounds were. I felt well proud when I figured out how to fix it :D Also I've noticed that I learned how to change the volume of audio in flash, that'll come in very useful.
I finished the FMV first this morning at like 4am I think, and then started finishing my essay. My laptop was really hot though, so I paused to let my laptop cool down, but I ended up falling asleep. Luckily my alarm went off at 10am and woke me up thinking "Huh? Where am I?" because I'd been having some strange dream, whose details I couldn't actually remember. Then I checked through my essay and it was kinda weird because I could think slightly better, so those two hours ish of sleep actually might have helped.
Then before noon I went to hand in with Ben, then found out I didn't have to hand my essay in right away, so I went back to mine to tidy up the Research section [I had more links than some other people, yay for thorough research], commonly known as a Bibliography - except I didn't want to call it that because most of my research involved looking at the opinions of people which they had posted on the 'net, as opposed to stuff I'd read in books.
As for the FMV, I don't like it anymore. I'm not sure whether it's because I actually don't like it, or if it's because I know who did what so that differences in style jump out at me, or if it's because I've been stressing about it for the past 7 days because I wanted it DONE a week early so that we could have a whole week to polish it, as opposed to the zero minutes we had instead because the "proper" slides were only started on... what was it...? Friday? Grr.
Or if it's cos of the associated pain of the horrible horrible brain ache I now have because of all this intense concentrating I've been doing on it to try to get it finished combined with the slight sleep deprivation. I hate "crunch time". I hate deadline stress. I hate knowing that despite spending considerably less time procrastinating than I have done in the past and focussing over the Christmas holidays [which contained not just Christmas and New Years, but also my birthday] on work instead of play, I STILL had to pull an all nighter.
The moral of the story is that video games are evil, and that I want to be a recluse artist philosopher who answers only to herself and lives in a pretty mansion cottage with a tree that fairies live in outside for me to look at when I feel like looking at a tree or climbing one, but isn't actually a recluse because she has lots of friends that invite her around to watch films all the time or to play truth or dare or to have an innocent massage party.
I'm halfway there.

Posted by Charlotte Gyseman at 18:43