The next project we're working on is a Flash project, with the theme Horror, if you couldn't tell from the title of this post. We're working in pairs, and Dave gave us all two "monsters" at random to include in the world that we decide to show, and we have 6 weeks to do it [well, 5 now I think].
I'm working with Daemon, and the "monsters" we were given were Angry Tech Support Customer and Rusty Sculpture. Yeah... I then proceeded to take a picture of Scott and Kieran labelled as appropriate, hahaha. 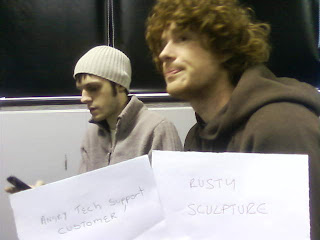 That's Scott's new iPhone in his hand, but moving on - Dae and I came up with a few ideas, which included:

1: An alien ship malfunctioned, crashed into a palace that is owned by a clown, that happens to contain rusty sculptures. The alien is the angry tech support customer.

2: Rusty armour that is possessed by a ghost, who wants a refund on the rusty armour, because it is rusty...

3: Tech office worker to be murdered by angry customer. The sculpture would be on his desk. Or the Tech guy turns into a murdering monster.

4: Swimming pool with a haunted statue, moved in to decorate the pool. Statue kills people indirectly via "technical difficulties", causing the owner to get angrier and angrier as his pool loses customers... literally.

We ended up picking number 4 to develop, probably because of all the ways we could think of to get people killed in a swimming pool. Nice bit of variety.. 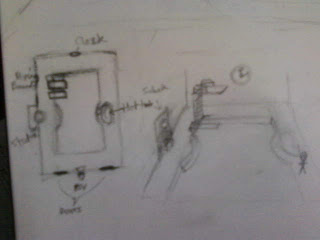 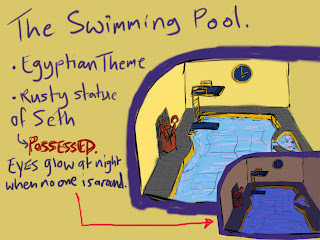 Thought we'd give it a bit of an Egyptian theme, figured it would be nice what with all the cursed stories you can hear about sometimes. Seth is the Egyptian God of Chaos, and murdered his brother by drowning him in a coffin in the Nile, so he seemed like a good candidate for the evil Rusty Sculpture. The statues eyes will flash red in the night, which is where the tech sabotage happens... 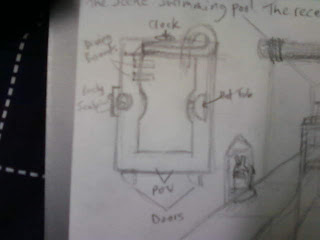 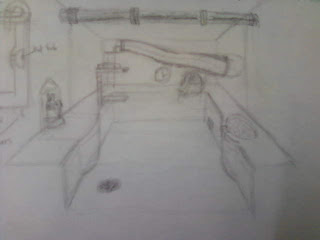 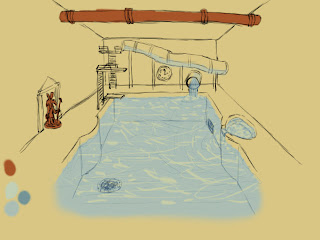 To make the pool seem a bit posher we've given it one of those slopes that come right up out of the water. It's a bit like the one at the Blue Lagoon where dad works [well, that's what it reminds me of]. Dae thought it would look sleeker with square or box shaped ducts above the pool instead of the round ones. 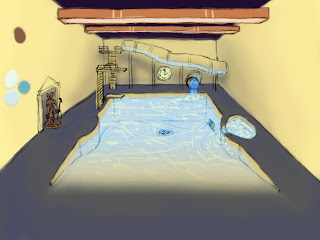 And yes, a section will be falling on top of someone at some point. We're also thinking of killing a clown in a cruelly comical fashion on the diving boards, skinning someone alive in the slide, cooking some people in the hot tub, sucking someone with a fan at the bottom of the pool, and perhaps having a shark or crocodile swim into the pool too. Fun times. 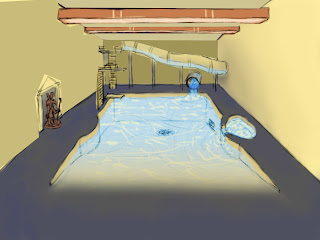 I sent the pool pic to Dae so he could explain what he meant about the darker walls, gonna do it properly in a bit. He's working on the Angry Manager, I might put a few pics up of him another time if I can. Now I'm really hungry, so watch this space, and do give input if you feel like it'll help.
Posted by Charlotte Gyseman at 19:25