How to Break a World of Warcraft Addiction

Get a hypnotist to hypnotise you into thinking you are Charlotte Gyseman.

I've noticed a funny thing about myself. I have played WoW, and I still have my WoW account, but I just can't be bothered to re-subscribe. I had to unsubscribe because I lost my Magic Money Card [I've lost it only twice and yet I'm on my fifth one, amazing], and had to replace it. That was weeks ago, and I have still not had the urge to start playing again. Well, sort of. 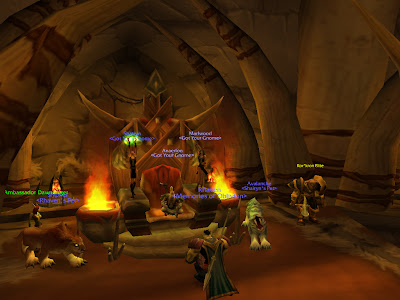 Dancing on Thrall's throne in nothing but a tabard was fun, but I'm sure it would be more fun in real life. And the sight of Luke dancing like a female blood elf in a tabard would be hilarious.

I've felt like it now and then because of the friends that play it, but I always get a voice in my head letting me know that I've got better things that I want to do, or that I'd rather have fun for free. I did wonder if it was because I have a dislike of spending my money, but that doesn't explain Black & White 2. Kieran lent me the game to see what it was like, and when I showed it to my sister... she got addicted. The last time I went home, my mum said that Gen [my sister] had asked her to tell me to make sure I bring B&W2. A similar thing happened when I introduced her to Twelve Sky.

Note: For those readers who actually want to break a WoW addiction and have no hypnotists to hand, the wikiHow article is here. I must admit, I laughed when I saw it and laughed when I noticed that it's the first one on the list when you type "addiction" in the search box. By the way, I have no idea whether following the steps actually helps. Apparently I've never had to try them.
Posted by Charlotte Gyseman at 15:45

Email ThisBlogThis!Share to TwitterShare to FacebookShare to Pinterest
Labels: Gaming