Age of Conan, The Last Bastion, and The Order of the Silver Dragons

I am so very intrigued right now. I came across the MMORPG, Age of Conan: Hyborian Adventures, and now I really really want to play it. Here's a "re-review" of the game, from curse.com.

I'll be honest, part of the attraction for me is the fact that it sounds different to WoW in gameplay. I was trying to play WoW the other day and found I'd forgotten how to play my belf rogue. Button mashing, anyone?

However, I also found what I've seen of the world to be quite pretty as well. Shiney water make Lottie go, "Oooooh! ^_^". Also, I kinda have a thing for watching the sun and shadows move in games as time goes on... 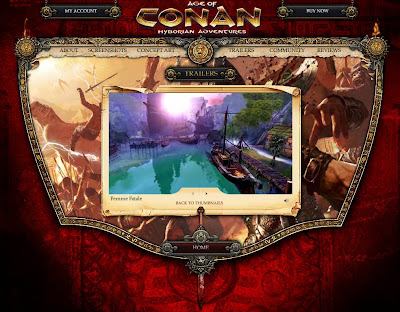 The Order of the Silver Dragons (OSD) are a long-standing multi-wing gaming community that was founded on January 9th, 2006, and exists well beyond any one game, being involved in many gaming environments. What makes the OSD unique is their ongoing commitment to mature interactions, their proud display of civility and concern, their desire for adventure and their healthy placement of value on individual effort and communications. They are known across many gaming servers for taking the high road when situations arise, and they pride themselves in the knowledge that they will always strive to help others. Their continued success stems directly from the OSD officers of this order whom take it upon themselves to uphold these virtues, reminiscent of the fabled Knights of the Round Table, which in turn are mimicked by the community of players within the guild.

Anyhooo, I've found Zsolaith's channel on YouTube and I'm about to watch what he's got there. You're more than welcome to join me :)
Posted by Charlotte Gyseman at 20:41