Sooo, for this project I'm working with Mr Ben Williams. Never ever worked with him before, so there's a chance it kinda of goes against what Dave said about picking your next partner carefully. That said, I guess I wouldn't have agreed to Ben if I thought he was someone who wouldn't pull his weight.

I had trouble coming up with ideas to begin with, blank pages tend to do that to me. So I tried to get Ben to give me something to bounce off. First thing was: He didn't want to do anything to do with butterflies or ants [my old project], or water [his old project]. Sounded fine by me, seeing as the only constraints we have is the fact that we'll be pitching to people who will tell us our idea is crap if it is, and Dave said that if we're up against anyone, we are up against the animators. That leaves a lot of scope for game ideas, seeing as we can make it about anything we want.

Second thing was: He fancies doing something playful, cheeky, and non-serious, with some memorable characters that people can talk and reminisce about. Also fine by me. It reminded me of the Gastronomy project [originally titled Fartman].

We've started off by doing some character designs, then met up to look at what each other had done, then decided things were looking good and that we can expand them a bit by putting them into scenarios and give them family members. Here's what I've drawn so far: 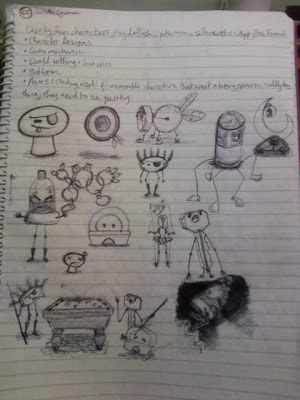 I've also come up with a rough idea for the scenario in the game, but we'll see what Ben thinks before I write it up here.
Posted by Charlotte Gyseman at 17:47