Had a help session on how to write a dissertation yesterday, was probably very helpful. I realised that if I write a minimum of 500 words per week [starting yesterday], then that will be 9000 words in the 18 weeks I have left [not including 2 weeks for proofreading the final draft and a week for printing and binding]. I'm still a bit iffy on the subject I'm writing about, but I think it will definitely be centred around the concept of fun and having fun and the effects of the need for fun on society.

It's going alright, this week I'll be working on the house which will act like a hub for the levels, while Tim works on the levels and some character designs. 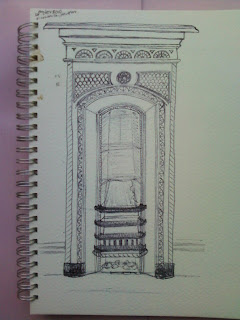 The animation seemed well received, I enjoyed how many laughs the "that's what she said" joke got. The next challenge is to create a 2-3 minute film by Thursday based on two characters, in the genre our groups picked out of the hat. Our genres were Horror and Scorsese styled gangster/crime.

It's probably going to be an animation from us again, but so far all I've actually drawn is this picture of De Niro's face: 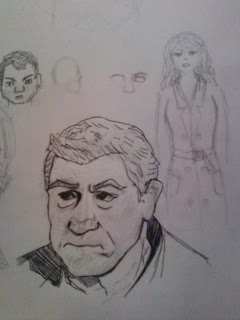 The story I came up with is this:

A gangster is walking along a street. He's somewhat aged and world-weary. He passes a young pretty girl; he doesn't know her, but her face seems familiar. He wonders where has he seen her before. As the girl passes, she also seems to find his face familiar.

Flashback to a faded past, and the guy is much younger. He has been sent to kill the men of a rival family - the girl's. Shots fire everywhere. Blood falls everywhere.

Colour returns. The man's eyes widen as he realises who the girl is. He turns, a breeze blows by. She's not there.

Colour fades and we're back to the past again. The camera pans up towards the nearby window. The girl has been left alone, surrounded by the dark red of her brothers. The breeze blows by, the scent of blood filtering out through the night, attracting the attention of a dark figure. The dark figure, fangs glinting, dissolves into the darkness, and the scene fades to black.

The quiet echo of a scream is heard, as the camera pans across to a close up profile of the man's troubled face, still peering out at the dimly lit street before him. Out of the darkness behind him, the girl emerges, hate ablaze in her eyes.

Just as she is about to strike, the scene cuts swiftly to black.

Posted by Charlotte Gyseman at 16:02