It has been a while since either of us have posted on this blog - apologies! Dissertations are out of the way now though, so we'll be able to focus our efforts on the project more :)

In the past month, "somebody" has vandalised room two. 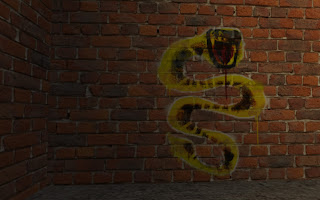 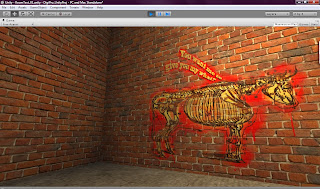 They even put one on the outside of the room! 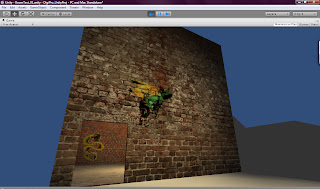 Meanwhile, I've been sat here at my laptop figuring out some javascript. I did manage to make the OrthoCamera [the 2D side view camera] move to the correct position depending on which room the player was in, but for some reason it kept forcing the view to change to it each time the new camera was created.

That wasn't supposed to happen, so after a chat with Mike Reddy [a Games & Artificial Intelligence lecturer] and Cody [? I think Rich said he went to UWN and graduated a few years ago?], I'm attempting to code this new script that tells the OrthoCamera to translate to the new position instead of destroying and re-instantiating it there... 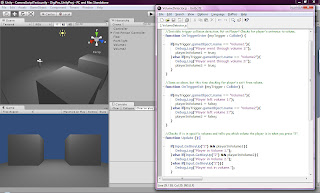 I got quite stuck on Tuesday when I started doing this, but after watching a few Unity 3D Student videos, I think it's on its way again.
Posted by Charlotte Gyseman at 10:47