So this is my dream blog...

Welcome and hello. Let's get right to it, shall we?

The Dream
This morning I dreamt that I was in my current uni room with some of the guys, and there were various parties going on. I noticed a drop of water hit my left arm. Then I noticed that there was water dripping from my ceiling around the edges the room, and from my fire detector. Obviously, I wanted to go upstairs to check out who the fuck had decided to flood the room above. Who would dare think a recreation of the AberG lounge Beach Party Flood above MY room would be a good idea?! 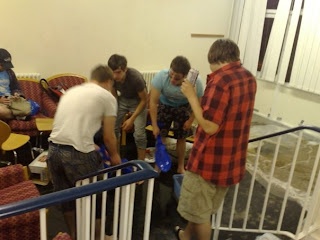 This happened almost 2 years ago. They got it cleaned up THAT NIGHT.
Fair play guys, fair play.
But I couldn't get out of bed. That's right; for no apparent reason, I can't get up. I also can't leave until I have put my little bit of crunched up tin foil in the bin next to my guitar. Which is literally only just over there. I completely forget all about the fact that the ceiling is dripping and that somebody gotta lotta 'splainin to do - my one goal now is to put my that foil into that bin.

I have to ask the boys for help. I remember Sam being one of the people definitely there and still in the room, so I ask him to pick me up or piggy back me or something over to my bin, and then we can all head over to where the party is at. Unfortunately, it totally doesn't work. He gives me the piggy back, but for some reason it fails and I'm back where I was in my bed.

The fall "wakes me up" and I realise I'm definitely in one of those dreams again. The ones where I'm dreaming with my eyes open.

I once had a dream last year where I was in bed and I couldn't move. I couldn't see it happen, but I remember feeling my whole abdomen totally dissolve. It was an incredibly odd sensation to be able to imagine and remember, and I remember feeling really annoyed with it, as if it was something as common as knocking over a drink. Who cares about the fact that I am now missing an abdomen; not only can I not move my limbs, but once I can move them I will now have a big disgusting mess to clean up out of my bed!

And ever since then, if I haven't seen a monster in my dream, I haven't been afraid of being paralysed. Just a bit miffed, really.

I don't know how the next bit happens, but somehow I managed to get out of bed and make it to my door. Except my door now has see through panels, and I feel like I'm in a weird cross between the lounge and a cafeteria. It seems to make sense at the time though. The other guys have gone, but through the window now I can see Joe Tranter, except he's dressed up all crazy and doesn't really look like Joe Tranter. He doesn't look like Red Mist either, but for some reason, that's what he reminds me of. We chat about something, possibly the party that happened "last night" that I had just woken up from. Or something.

Then a lunch lady / cleaner comes by the corridor with her trolley, and I duck down so that all she sees is Joe standing there, alone, in his crazy gear. Joe asks me as she passes if I did that just to piss him off, or if I was gonna do that anyways. I think I laughed and said I would have hidden anyway.

The Reality
I had just been woken up by my alarm at around 10.30am, and I turned my light on to wake me up. Except it didn't wake me up.

I went back to sleep, with the light on, and with the weather outside being noisy and windy [yesterday morning the wind had managed to blow a few little bits of roof off of the new City Campus building. It looked much less exciting than it sounds].

Then my eyes probably opened a little bit to show me this: 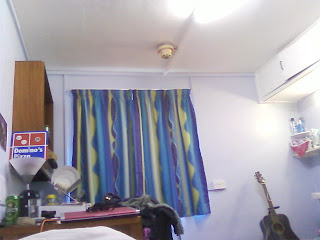 It's my room from where I could see it in my bed. Note the fire detector on the ceiling. My bin is just out of shot, at the bottom, to the right of my guitar. Last night when I went to sleep I purposefully arranged my blanket around me in a way that would obscure my vision of objects in the room. I didn't do the same after turning my light on in the morning.

I've had many dreams now where the scene or the overall look of the scene looked very much like what I see from my bed. After being told that I look freaky when my eyes are open when I'm asleep, I have not only come to the conclusion that I must be dreaming with my eyes open, but I've also become intrigued by just how my dreams are affected by the visual stimulus I am getting and my various reactions to it. And that's why I have started up this blog - I want to tell people about these experiences. Should have thought of it sooner, really. 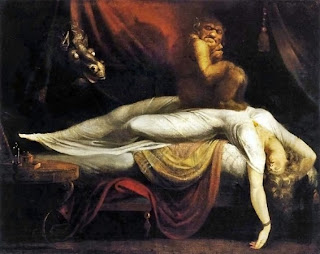 I find it's more annoying than scary when you don't imagine it's a demon doing it to you.
The thing that I don't quite understand is why it feels like the last thing I dreamt was the exchange with Joe, when I was definitely in my bed in my dream just prior to waking up. Or maybe I wasn't. Maybe I just think I was because when I saw my bedroom again I thought I was still dreaming, until I turned my head to the side and realised that - in comparison to everything that had just happened - that minuscule turn had felt more real than any of the other attempts to turn my head or get out of bed.
Posted by Charlotte Gyseman at 15:13

Email ThisBlogThis!Share to TwitterShare to FacebookShare to Pinterest
Labels: after back to sleep, Dream Diary, eyes open, morning