Where have you gone again my sweet?

Woah. I can't believe I actually missed out an entire month from writing on here. And I've had two hand-ins to write about.

I handed in almost the required amount of words in time on Moodle [the online submission thing]. Except, I might have posted it on the wrong submission link and I didn't hand in a hard copy, so the other day when Rich emailed me asking for it, that may have been the first time any of the lecturers saw it. Woops.

Also, I've been staying away from it since the draft hand in on Jan 13th. On the plus side, I finally borrowed Raph Koster's Theory of Fun from the library. It was an interesting read and some of it might come in handy. I definitely should be focussing more time on the dissertation than I have been though. I guessed biggest problem is a lack of dedication. I should probably set myself some extra deadlines to meet to make sure I have something half decent to hand in.

Handed in a concept doc [or "Design Portfolio", I should say], dev. diary and 1500 word "post mortem" of the process. The hand-in itself was pretty easy going in the end. I wrote up my post-mortem on Sunday, the day before the hand-in deadline. Then because the deadline was at noon-ish the next day, I figured I'd hand it in via Moodle early, that Sunday night, so I could have a sleep in if I felt like it. I don't think I did sleep in, but I did keep on my pajamas.

I wrote about this on my "business" blog [I'm not sure I can really call it that until I sell something]. Check out the post here [I also talk about sheep poo paper. And tiny houses].

It's been going okay, I've noticed after 3 weeks of doing it that I've started to attempt colour coding my days.. Standard sorts of emotional colours, adding random extras of yellow for happy, blue for sad and red for angry. The pages have also started to be less about drawing something artsy and more about recording what I was doing or focussing on that day.

Shown here are 28JAN, in which I accompanied Sam and Tom of the Irving and Booth varieties on their day off to Barry Island, and then drank wine, helped invent a new game, and went to a fairly empty Uni rave, and the 29JAN, which was when I spent part of the day catching up on five days worth of pages. Apparently I'm not very good at doing a page a day sometimes, especially when I spend a few days over at Camp Sausage.* 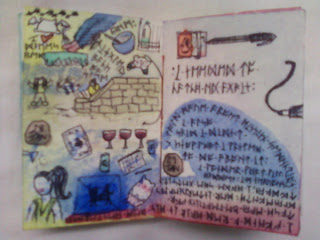 *Camp Sausage n. the house at which numerous friends of mine - of the male variety - live

And oh my! I totally forgot. According to page 25JAN, that was the day I died.

...Not for real. Dave of the Ware variety phoned me up and asked me if I could help him and Dan of the O'Hara variety with a teaser tape. I had to run around Caerleon for a bit and look scared and then relieved on camera and then - oh no! Turns out there was still a murderer nearby. I had to lie on the muddy pathway and pretend I'd been killed while they dripped fake blood on a real knife and tried not to drop either upon me. It was all quite fun actually. Still need to wipe the mud off that coat though.

And Claire's acting was really interesting to see. I say interesting; I should probably say awesome. It was really unnerving - in a good way - and as a result, half of my acting wasn't even acting. She really was behaving the whole time like the kind of person who was on the edge enough to kill me, and until she said "I'm back" and laughed her friendly laugh, I was slightly scared that she might actually kill me [I'd seen her around before but had only met her properly that night].

It was brilliant, and totally freaky. It was as if she'd put herself under hypnosis - she wasn't acting the character. In those few hours, she was living it. Dave told me later that when they filmed some other scenes at her house while she was back in character that it was even more intense and freaky, as she'd actually be talking back to and staring at them while being this on-the-edge and unstable, agitated character.

I know that story is not much to do with CGD but.. self induced hypnotic trances? The whole thing just fascinates me.
Posted by Charlotte Gyseman at 22:56