Yes, I know, it's very pink. I'd like to give you a scientific explanation for it, but scientists haven't made it to the island yet. 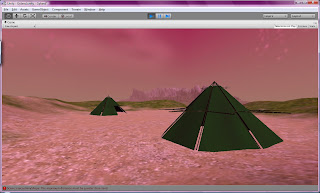 After Pete pointed me in the direction of FBX file formats, I got all excited yesterday and made a teepee style hut in Maya, very quickly textured it, imported it into Unity and then figured out how the import scaling thing works.
Then I decided to give the place a sky, except I didn't know how, so I googled it and learned how to put on a standard sky box. But then I wanted to know how to make my own custom skyboxes, so I tried making a really basic one, but it looked boxy, so I experimented with distortion and stuff in Photoshop. It didn't turn out too great, I think I distorted the image forwards instead of backwards so the sky felt really... close.. Also it was a quick bodgey experiment jobby, so the edges didn't match up either.. haha.
Think I'll try putting a square tiled textured into the skybox and play with distortion more. I do realise that there are probably tools out there for this... they may save time, but they take all the fun out of it!
Looks like this island isn't going to be much if an SAS simulator, I think I'll get carried away with my liking of fairies and stuff [yeah, I like fairies, what of it?], and make giant plants and other pretty stuff to fill the island. I might even make the camp fire be a giant orange peel oil lamp, based on the one I made today... 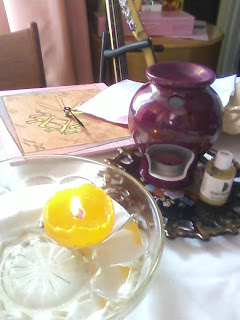 Posted by Charlotte Gyseman at 14:23