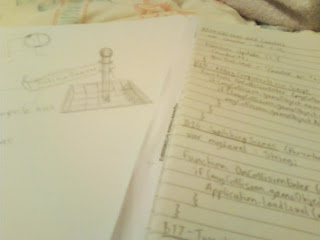 Today I finished watching and taking notes of the scripts used in videos B00 to B19 in the Beginner's section of the Unity 3D Student site. I'm excited now, because I'm actually learning how to make stuff happen using scripts :D

Also started mind-mapping the inspirations for the actual game concept today. I was thinking about levels where the player would have to get to a certain position in a room so that an anamorphic image on a wall would become legible.

But then... it would turn out that the now legible writing is actually a riddle, that the player will need to figure out during the course of the game. Perhaps they'll need to read multiple clues for any of them to make sense.

That idea was kind of inspired by the Batman film I saw recently - the one with Jim Carey as Edward Nygma aka The Riddler.
Posted by Charlotte Gyseman at 20:33