My latest obsessions were inspired by a link a friend posted on Facebook [my, does that Facebook get around. I've been hearing it referred to on TV as if it were an everyday part of British life.. So it's official, then].
Tranforming Furniture 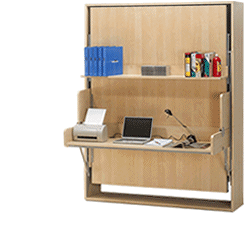 I've kind of picked a really rubbish picture to illustrate. It's a .gif and it worked better when it was actually moving.. Check out Dornob for tons of better pictures of weird designs, and not just of the transforming variety.

Stylish transforming furniture is super cool. Maybe I just think it is because I've been living in 3-bedroomed houses in a family of 7 since 1996, with 4 girls squidged together in one room on two bunk beds for the majority of the time, or maybe it's because it makes me think of secret laboratories and hidden rooms. Or both.

I started figuring out how some of it works/could and even made a lame cardboard mock up out of a Cream of Mushroom Cup a Soup box. I think if I had the time and room to work in and my dad would let me borrow some of his tools, I could probably knock up something cool. But if that fails...
Dolls' Houses
Okay, so my recent project of building a virtual version of my house is probably quite like building a virtual doll's house. It makes sense I guess.
- I had Polly Pockets when I was little. I made a little flat out of paper for one. I think it had an elevator, but how I managed to come up with that and make it work I don't know.
- In a big bucket of sand I sculpted a haven for woodlice when I was around 5-7 years old, with some damp wood for them to munch on. They loved it.
- In DT at school I made a Barbie-sized plywood chair, complete with foam padding and light blue material covering [didn't quite get around to gluing the arm-leg pieces onto the main chair piece though, for some reason].
I'm fairly sure wanting to create little environments and worlds was probably one of my motivators for getting onto a CGD course in the first place.. But why stop there when I can create awesome little houses out of actual physical objects! ...Haha.
I'm pretty sure it'll be a full blown hobby eventually, but at the moment I'm thinking about making and publishing a book for kids who were/are like me. I could make one about Castles. And one about Fairy Hotels. And then when I'm rich because I've sold billions of copies, I can get onto the next project:
Cool Homes
Basically, my plan is to create a cool home for me. I've been spending a lot of time browsing the pages of WebUrbanist, and if I have learned one thing from them it's this: homes don't have to look like any of the houses you've ever lived in before.
I would probably have a secret laboratory, as well as a workshop and study [although they might be integrated with the lab]. An indoor gym and outdoor assault course like Lara Croft has in Tomb Raider III would probably be cool, and I'd have to have a party room or hangout area for friends to come chill in, and I would have other cool [a secret cinema?] and useful things in my house [like, um, an Internet connection and plumbing and electricity]. And it might be situated in a tree. And part of it would be underground. It would probably end up being the kind of place someone would walk into and say,
"... What?!"
Unless they were kids, in which case they'd probably just want to live there. And I would be like,
"NO! MY HOUSE! Go and buy all of my books and make friends with constructors and you can figure out how to build your own awesome house."
And then they would, and we'd all live happily ever after, each in our own houses. The End.
Posted by Charlotte Gyseman at 12:17

Email ThisBlogThis!Share to TwitterShare to FacebookShare to Pinterest
Labels: projects