During the research for Squeak's desk, I found that plants are supposed to help in the area of creativity. Failing a real nice pot plant on the desk, a tree outside the window is supposed to improve mood. 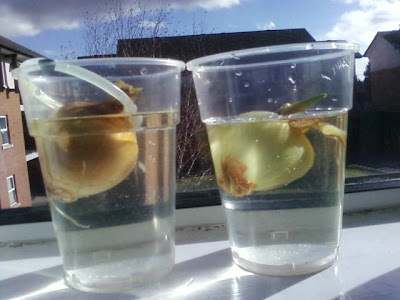 Two of my cooking onions started sprouting. I've put them in cups of water on my window sill to see what will happen. All I've noticed in the past few hours is bubbles appearing and the water turning very slightly brown. 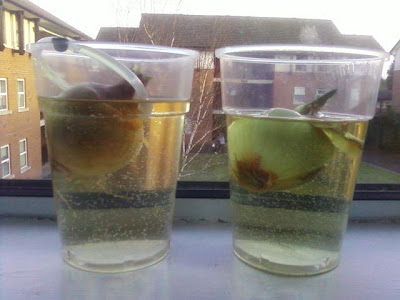 Perhaps if they live and grow, their presence will improve my mood and creativity. Maybe I'll stick googly eyes on them and make a film about them having a conversation.

---
Day 2: 11:30AM
The water is now twice as brown as it was, the one on the right being a slightly yellower hue. I've taken photos but for some reason the bluetooth connection between my phone and laptop is failing. [Update: Bluetooth now works..] 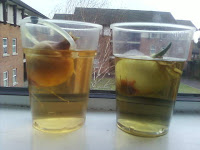 Most of the bubbles have disappeared, but I've noticed the one on the right developing lots of furry little hairs. I think it's mould regrowth, because it was starting to go a little mouldy under the outer layer, but I decided to try salvaging it because it wasn't really squishy and had the biggest shoot. It possibly won't survive. I put a tiny bit of antibacterial Listerine in the right one to see what would happen...

---
Day 3: 01:00AM
Just got back from AberG, where a massive cookie was made and Father Ted was watched [I now have a song about a lovely horse in my head]. It seems the Listerine hasn't done that much to stop the tiny hairs growing in the right one, as there's now possibly 2 or 3 times as much underwater fluff as there was before. Although it does smell like Listerine, which can only be a good thing. And the water in it has turned a much darker tint, but not cloudy. I wasn't expecting that. 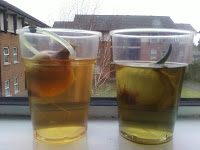 As for the left one, the water level seems to have dropped more than the right one, even counting the Listerine I added [it wasn't that much at all]. I'll take a photo tomorrow morning when it's daylight outside, it might show the fluff better. 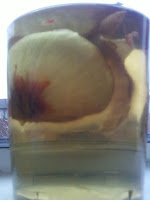 12:20pm: I've decided not to put anymore photos up on this post, except for especially interesting occurrences... I will continue to take a picture daily however, and will probably edit them into a video. The right mould-grower seems to be doing fine apart from the mould, I'm fairly sure the shoot is still growing.

---
Day 4: 01:45PM
THEY'RE GROWING NEW ROOTS!! ^_^
And both shoots are definitely growing :D My brother suggested I change the water, so I've given them some fresh stuff. 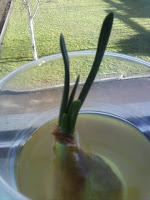 As for the other one, I put it into my bathroom to see if the dark would make it grow a bit faster. It hasn't really. Not sure why. 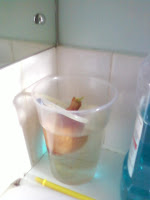 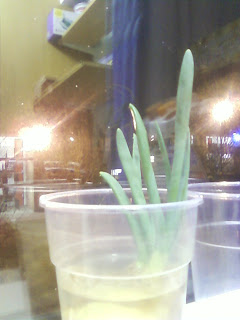 I'm naming her "Medusa" after my brother's odd comment on the subject of growing onions. The other onion is sprouting well now, I think I'll name it "Kaa", after that discussion I had with some friends in which we couldn't remember the name of the snake from The Jungle Books. Cheers, google. I think there's another onion sprouting in the cupboard. I might put it in another cup and try a spot of time-lapse filming on it. 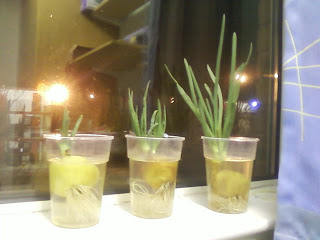 The new addition is doing well. Kaa seems to be quite small compared to Medusa regarding shoots, but has 3 groupings while Medusa has 2 [nice, considering I live in flat KA3]. I'm thinking of renaming them as Kaaa and Metusa. When it comes to roots, Medusa's seem comparatively short. Oh! And I've only just noticed, by the roots on Kaa and Medusa have started branching.

Posted by Charlotte Gyseman at 16:27